“Failure teaches more than success & preparation combined, and it is your response to failure that defines your trajectory. You learn to pick yourself up only after you fall”

Today I’ll stick to the sidelines, and let my fellow pun-partner’s teenage to post-graduate narrative intrigue you. Today I’ll show you how being different, thinking on your own, taking independent decisions and standing on your own feet matters. Today I stand here, a mere spectator, on the precipice of an insightful narrative, an indulging tale, and an unscripted version of Akashdeep Baruah’s journey so far.

A journey of self-discovery, albeit an erring, sarcasm-ridden & a thrilling one for him, with certain subtle moments of authorial intrusion, perfected metaphors & honestly aired grievances against the bloody system in general – smokey water under the bridge, fire in the sky.

Akashdeep, a charismatic guitarist, a moody singer & an artistic writer, hails from the laid-back town of Jorhat in Assam. In the picturesque setting of minimal development, multitude of tea-gardens, and myriad cults of moody friends he grew up studying in the then ‘prestigious’ Carmel School under the ICSE board. 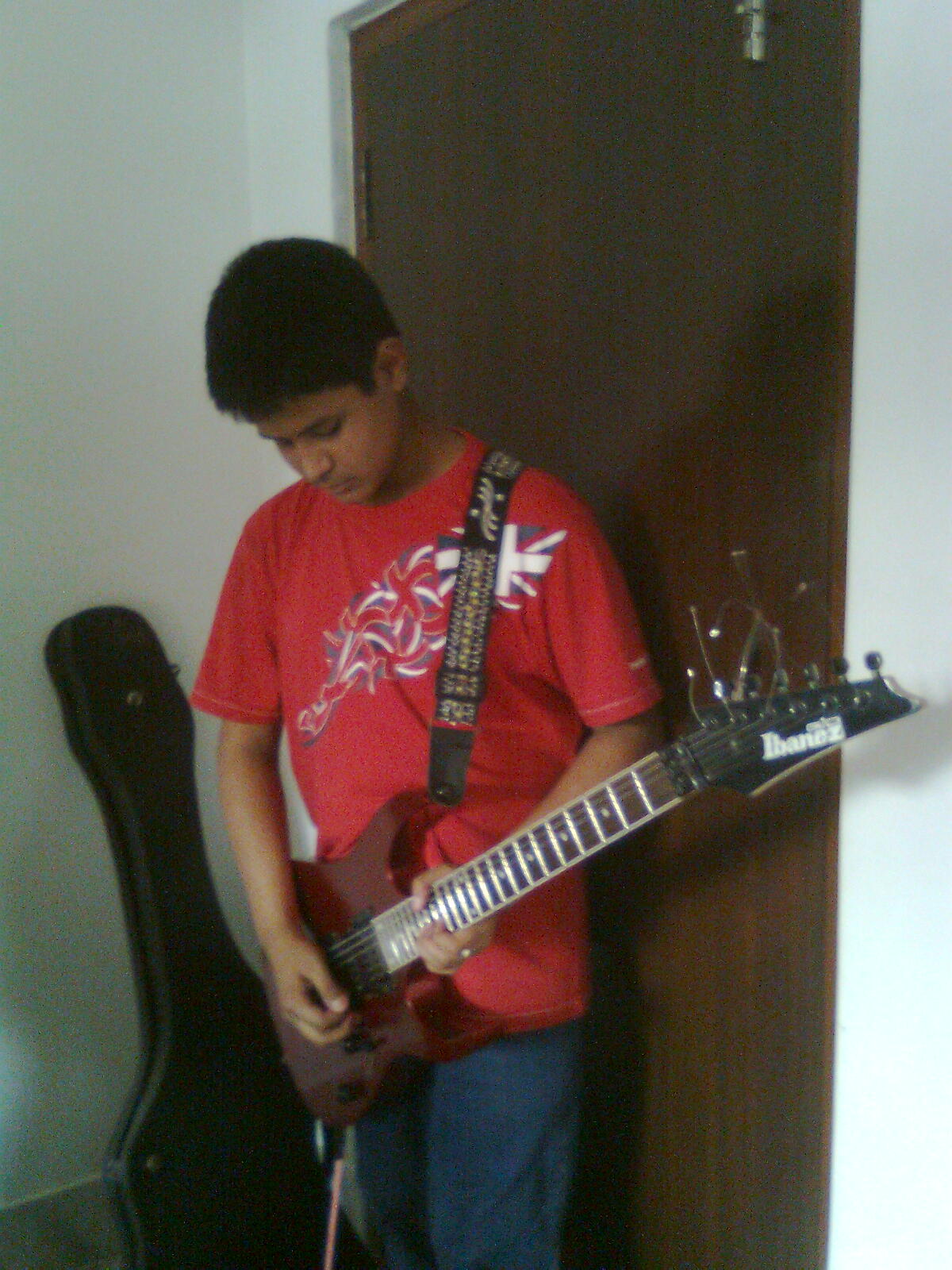 It was a unique journey for him, and many others can truly agree, from kindergarten to 10th standard. Filled with endless memories, awesome events and getting into an insanely close-knit group of teens, who we still call-up, meet-up & get all nostalgic when the mood is right and home’s in sight.

Passing out after 12 years in Carmel, he joined Assam Rifles for his 10+ studies. And therein begins a new phase of his life, which he so perfectly recalls, and which quite rightly seems the prologue to a seemingly ordinary tale, but one filled with such honest & simple insights. Below is the informal questionnaire, if it can be called that, I shot at him. So let’s get cracking & see what Akash had to say regarding them all.

Does 90% mean you were Born for Science?

My parents misjudged my score in ICSE. Just ‘coz you crossed the barrier of 90, doesn’t mean you’ll opt for science. I tried convincing them, trying to let them know that I had no interest in science and wanted to pursue Economics (Commerce), the subject I have always loved. But, Access Denied. Error 403: Forbidden. Permission Not Found.

My scores in 11th bombed and tanked like the new Justice League Movie. Probably worse. On the day of 11th standard results while driving back home, my mother had given me the option to shift streams and start off with commerce. I was not ready to change lanes in the middle, or drop a year in between studies.

I stuck around with science and what followed was the most catastrophic year of my life. My report cards had more ‘F’s than the script of any Scorsese movie. My mood was mostly morose melancholic. Well, it’s proper to say I took my fair share of shelling & bombardment from studies in 12th, almost a reenactment of Dunkirk after that.

Mar 20th, 2013 – Last exam of 12th boards and all I had in my mind was that I had successfully managed to end ties with science.

Is making your Own decisions that simple?

Right from the age of 14-15, I had plans of moving out of Assam after my boards. I wanted to leave after 10th but my parents persuaded me stay back for a couple of more years. And when it comes to Pune, both of my uncles had studied there, so I had heard a lot of stories about the city. And eventually I zeroed in on pursuing a Bachelors degree in Pune. My only agenda was to leave home, stay alone in a different city far far far far away from everyone else. Life begins outside your comfort zone and I was quite desperate to leave mine.

My mind was like a war zone. Too many thoughts per unit area. I was preparing myself for two major things:

Does clutch decisions bring any struggles with it ?

In my initial days, I stayed in a PG. The landlord and the other occupants looked fishy from the very first day but I had no choice. Finding accommodation in a city like Pune was & still is difficult. And after like 3 days or so, the dynamics of the household began to change. The landlord fired the maid, followed by the cook and began selling his appliances. He said he was in a ‘financial crunch’ and things would be back to normal soon.

A couple of days later, I was out for tea. As I entered the stall, a tall man with a fast receding hairline stopped me and said I needed to vacate the house in the next 5 days. He was the broker (apparently) who was going to help my landlord sell the house and overcome the ‘crunch’. I had just been in the city for roughly 15 days, didn’t know anyone and now I had 5 days to vacate my place. Hello homelessness, almost! Luckily the same guy offered to help me out and he got me a studio apartment, into which I managed to move in, at the very last moment. All this happened in 4 weeks. So you can guess how demanding & albeit scripted it may seem to readers, but those were testing times indeed!

On the academic side, life was picking up where it had left off in 2010. Economics was back in my life. I loved economics, loved to write and had inculcated a fond inclination towards journalism. Then I thought I’d either pick one and try and make a living out of it. Eventually, I decided to combine them and the quest (to make money) is still on.

Have you ever been at a cross-roads in life?

“Towards the end of my graduation, I was torn apart between my choices – Journalism and Economics. Both came with their own sets of pros and cons. So one day I decided to go all Ted Mosby on it and sat down with my yellow legal pad to note down the pros and cons.

I checked institutes (such as IIMC and Jamia Millia Islamia), and had previously looked into Masters opportunities in Pune itself when I first came for my bachelors admissions. Any masters in Economics (MA/MSc) had a huge dose of calculus in it and I was not up for it. I’m as good with maths as Trump is with sensibility. So, eco was out and journalism was finalised.

The IIMC seat was secured by me, but a 1 year PG Diploma was not favoured by parents/family. So I ended up admitting myself, apologies for making it sound medically ethical, into University of Pune for a Masters degree in Journalism and Mass Communication.

Are there any moments which still fascinate you? Can you thrive as a creative?

I had been writing casually throughout school and things took a turn in 2013 when I landed my first internship at YouthEpisode. That started off great but due to my PG crisis, I had to end it abruptly. I was back to writing casually and reading this new thing on the net – Anchovy’s Backyard, with his melancholic burps and different shades of life. Good stuff! (Authorial Intrusion – Thanks for the honourable mention Akash!)

My 2nd internship came in March 2014, where I joined Bullseye Mag as content writer who wrote about movies, music and television. It eventually grew bigger and gave me the position of the Editor of the entertainment section with 12 interns working under me. All of this happening within a span of a year. Things were going good and then Bullseye crashed. Tears to dust. Love’s too fast. This good thing came to an end., as all good ones do, eventually.

But my most vital internship came in the December of 2016 with The Indian Express. It was an absolute change in dynamics. The difference in writing for a Web portal, for an online magazine and for a national daily, was huge. Indian express taught me a lot of things and more importantly it taught me how to write simple stuff for simple audience.

I wanna love what I do and do what I love. Right now all I can think along the lines of love is writing. I’ll probably take some time off and write a few songs. Hippy, peppy, easy on the ears stuff, which won’t be censored. The media is a diversified field and if you can write, you can enter any of the allied fields. You can be a reporter, a feature writer, script-writer for TV/Radio/Web, travel writer, copywriter (Advertising) and critique things through analytical writing. The cursor never stops and once you have found your ground, its godspeed. I’m up for any of these fields. Whoever decides to hire me and pay me well, I’m ready to move my cursor for them.

“Remember when you were young, you shone like the sun.
Shine on you crazy diamond.
Now there’s a look in your eyes, like black holes in the sky.
Shine on you crazy diamond.
You were caught on the crossfire of childhood and stardom,
Blown on the steel breeze.
Come on you target for faraway laughter,
Come on you stranger, you legend, you martyr, and shine!”